Talking About Disability #4 – On Songwriting and Disability 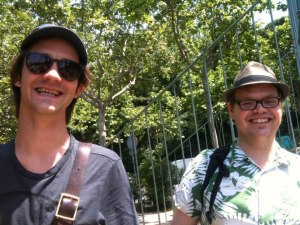 So far I’ve talked a bit about having disabilities but how do they affect me as a musician, in terms of the work I actually create?

To answer that, I’ve put together a podcast of songs I’ve written that I consider to stem from my disabilities interspersed with my good friend Felix Hunt, who plays in one of the two bands I’m in – the Count of Chateau Noir – interviewing me about the songs and what made me write them.

This is quite an in-depth discussion and I’ve taken a decision not to edit too much to allow it to remain fairly in-depth but I realise, because of the level of detail, it may not be for everyone.  But, if you are interested in songwriting or disability issues or anything like that,  I think we do have an interesting discussion – especially around The Yellow Castle on the Hill.

Anyway, here it is:

Quick Footnote on the Yellow Castle on the Hill

During The Yellow Castle on the Hill – which the only one of the songs on the list that is overtly about the treatment of disability on the whole, rather than any kind of personal confessional – I talk about the history of Stoke Park Hospital in Bristol (i.e. the Yellow Castle in the song).  Stoke Park was a hospital for people with learning disabilities and there is a short documentary here which is worth watching, put together by a theatre group working with people with learning disabilities on the history of the hospital.   It’s a pretty powerful and damning description of the conditions in institutions for people with Learning Disabilities for much of the 20th Century and pretty much gives the whole context of the song.   As a newspaper headline in this documentary says, “these are all somebody’s sons and daughters” and the conditions endured by certain human beings in this country until relatively recently are one of the great unspoken human rights issues of the 20th Century.

Filed under Talking About Disability