The Krampus is a demonic hell-beast resembling a horrifically mutated goat with a sadistically wide range of punishments and tortures.  He beat children with a birch rod on occasions, but he also had a whole repertoire of penalties that ranged from ripping out a girl’s pigtails to leading children off cliffs Pied Piper-style or tossing children onto a train that was on a one-way journey to a lake of fire. He especially enjoyed eating naughty children for Christmas dinner and he’d even carry a bathtub on his back just in case the mood took him to drown a child in a bathful of water – or sometimes ink – before fishing them out with his pitchfork to eat.

5 December was not only St Nicholas’s Eve but it was also Krampusnacht – the night when the Krampus was free to roam the Alpine streets, heading from house to house to demand tribute, often in the form of alcohol.  The Krampusse in question were really large groups of young men dressed up in self-made costumes of fur, masks and goats’ horns charging around the streets with birch rods and pitchforks getting increasingly drunk, accusing people they encounter of misbehaviour and threatening to beat them up as punishment. Genuine monsters from the fires of Hell would probably have caused less destruction.

Whilst many of these other Christmas characters peaked during the fifteenth and sixteenth centuries, interest in and enthusiasm for the Krampus seems to have grown over time and the Krampusnacht remains popular today.  The nineteenth-century invention of Christmas cards saw an explosion of Christmas images of the Krampus sent around the world. The images were generally intended to be comical and something about the mischievousness and malevolence of the character clearly appealed, for Krampus cards were extremely popular. One card shows him grabbing a girl by the pigtails trying to pull her hair out.  Another sees him in a motor car stealing children.  In yet another card he is dragging a group of children off the edge of a cliff, beating children or driving off in a cart with a child in a sack on his back. Yet another card shows a group of children opening a box wrapped with shiny Christmas paper only to find the Krampus hiding inside waiting for them. 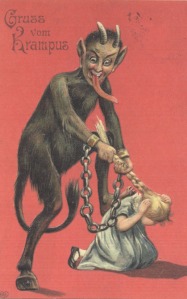 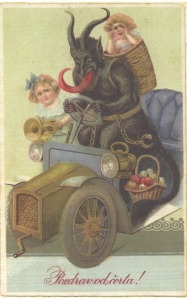 Some of the cards have a clear sexual twist. The Krampus is sometimes seen romancing attractive ladies and a couple of cards even show gigantic female Krampusse – far more woman than Krampus – chasing after adult men or carrying them away in her sack. This sexual theme for the Krampus would expand hugely after the sexual liberation in the 1960s, when cards often showed the fierce demonic figure invading the bedrooms of scantily clad women to beat them with his birch rod.

For the most part, however, the Krampus remains a source of terror.  The Krampusnacht continues today and is as popular as ever and, whilst it is slightly more sanitised than its anarchic Medieval peak, it still makes for a surreal and terrifying experience.

“Bad Santas and Other Creepy Christmas” by Paul Hawkins is published by Simon & Schuster and out now.  The Krampus image in the picture is by Mel Four and taken from the book.  The other Krampus pictures are from vintagepostcards and are mostly taken from Krampus.com

*(genuinely – it’s a link to the Atlantic and not affiliated to me in anyway!)